Milestone: 150,000th quickcoupler has been produced 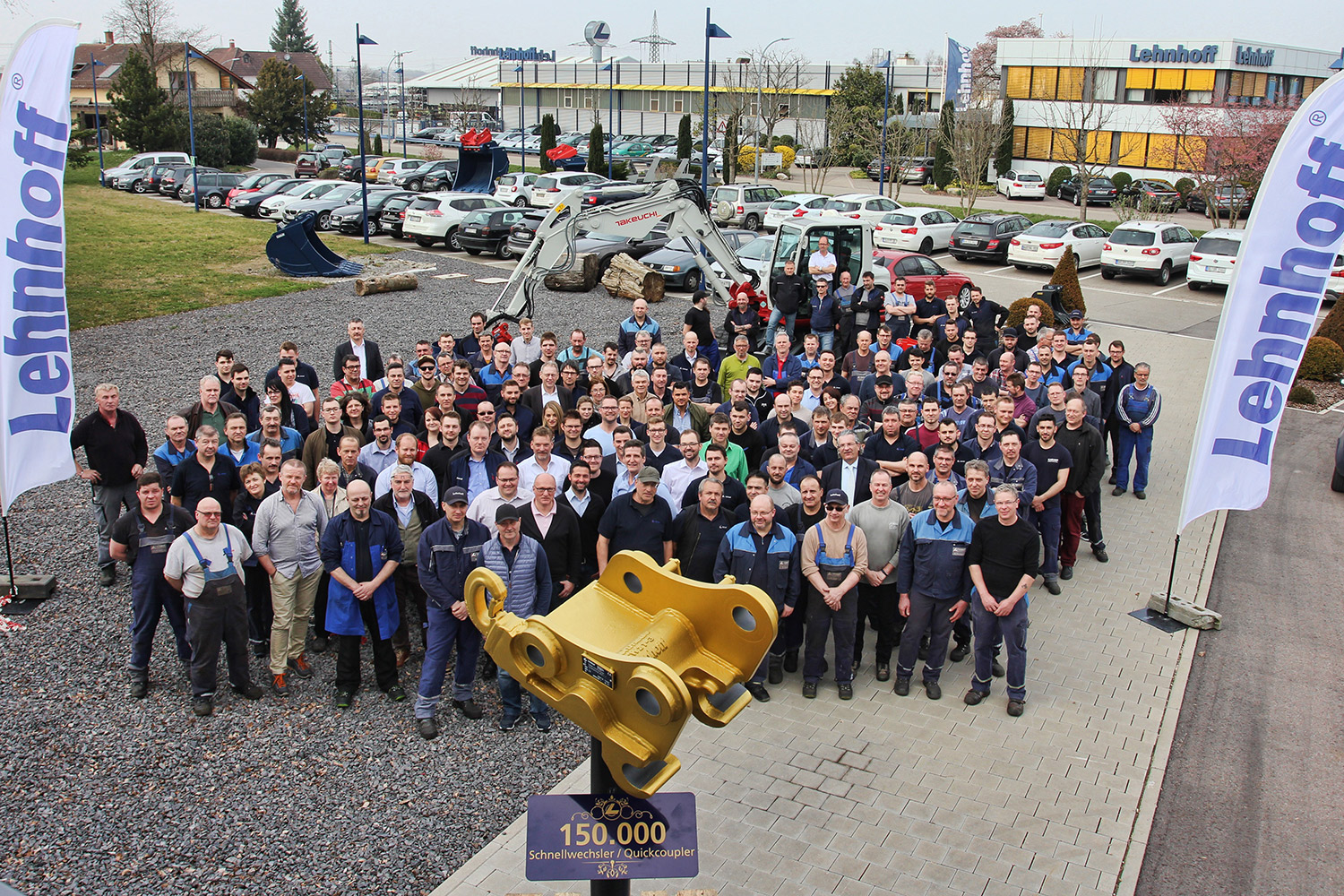 Looking back now, 1989 was a defining year for the Lehnhoff company: Lehnhoff Hartstahl sold their first self-developed quickcoupler systems. This was the beginning of a special success story, driven by German engineering skill and absolute determination with regard to innovation. 2017, almost 30 years later, Lehnhoff now sold the 150,000th quickcoupler system.

However, what today looks like a straight, smooth path to success has been a rather rocky road: a couple of years back in the mid-80’s, other suppliers already offered quick-coupling systems in several European neighboring countries. Yet, users complaint about poor quality. Thus, Peter A. Lehnhoff took up the challenge and enforced the company’s endeavors to develop their own system “Lehmatic” for the German market. Until then, quick hitches had been rather non-existent in Germany.

A little later in 1989/90, Lehnhoff eventually launched their own new quickcoupler system. Unfortunately, the German customers remained rather reserved and guarded with regard to the newly developed mechanical MS03 and MS20. Lehnhoff sold the new quickcoupler system only eight times in this first year. Constant further development of the quickcouplers and their adaptation for multiple excavator classes as well as the untiring efforts of the sales unit eventually convinced an increasing number of construction companies of the system’s economic efficiency. Consequently, the demand for Lehnhoff quickcoupler systems began to increase.

Quickly now, more and more important construction companies and suppliers became interested in Lehnhoff. Well-known manufacturers were won over by the efficiency and technical edge of the system, equipping their excavators with it ex works. Lehnhoff Hartstahl turned into a pioneer with regard to quick coupling systems in Germany, which contributed significantly to the excellent reputation of the company around the globe. In 1997, the Lehmatic HS100 for excavators up to 130 tons completed the quickcoupler portfolio.

The golden anniversary quickcoupler is a mechanical MS21, in a way a direct successor of the original first models developed by Lehnhoff. The current trend, however, is more towards hydraulic and fully hydraulic models.

Today, Lehnhoff equips hydraulic excavators from 1 to 130 tons with either mechanical (1 to 40 tons), hydraulic (1 to 130 tons), or fully hydraulic (2 to 130 tons) quickcoupler systems. The fully hydraulic Variolock energy circuit coupling system makes changing all attachments easy, safe, and quick. The driver can comfortably change all tools including the hydraulic connection at the press of a button from the cab. The hydraulic unit and the tried and tested original Lehnhoff quickcoupler form a compact unit. The locking operation is carried out via a lockable push button or optional with the control panel Lehmatic Safety Control (LSC). Due to these features, efficiency, precision, and, above all, safety at the construction site have been increased enormously.

With the quickcoupler at the excavator and the adapter at the attachment, Lehnhoff has created a universal interface, which allows the use of all attachments in connection with various excavators of different brands. The Lehmatic quickcoupler system turns every hydraulic excavator into a multifunctional attachment carrier for buckets, grabs, or demolition equipment, regardless if it’s a mini or a heavy duty one. The technology with conical locking pin, coupling shaft, and characteristic lock plate has not changed over the course of the years – and as a result, old attachments can still be hooked safely to the quickcoupler even 25 years later.

We use cookies to enhance your user experience. Continue with your visit by dismissing this message or find out more