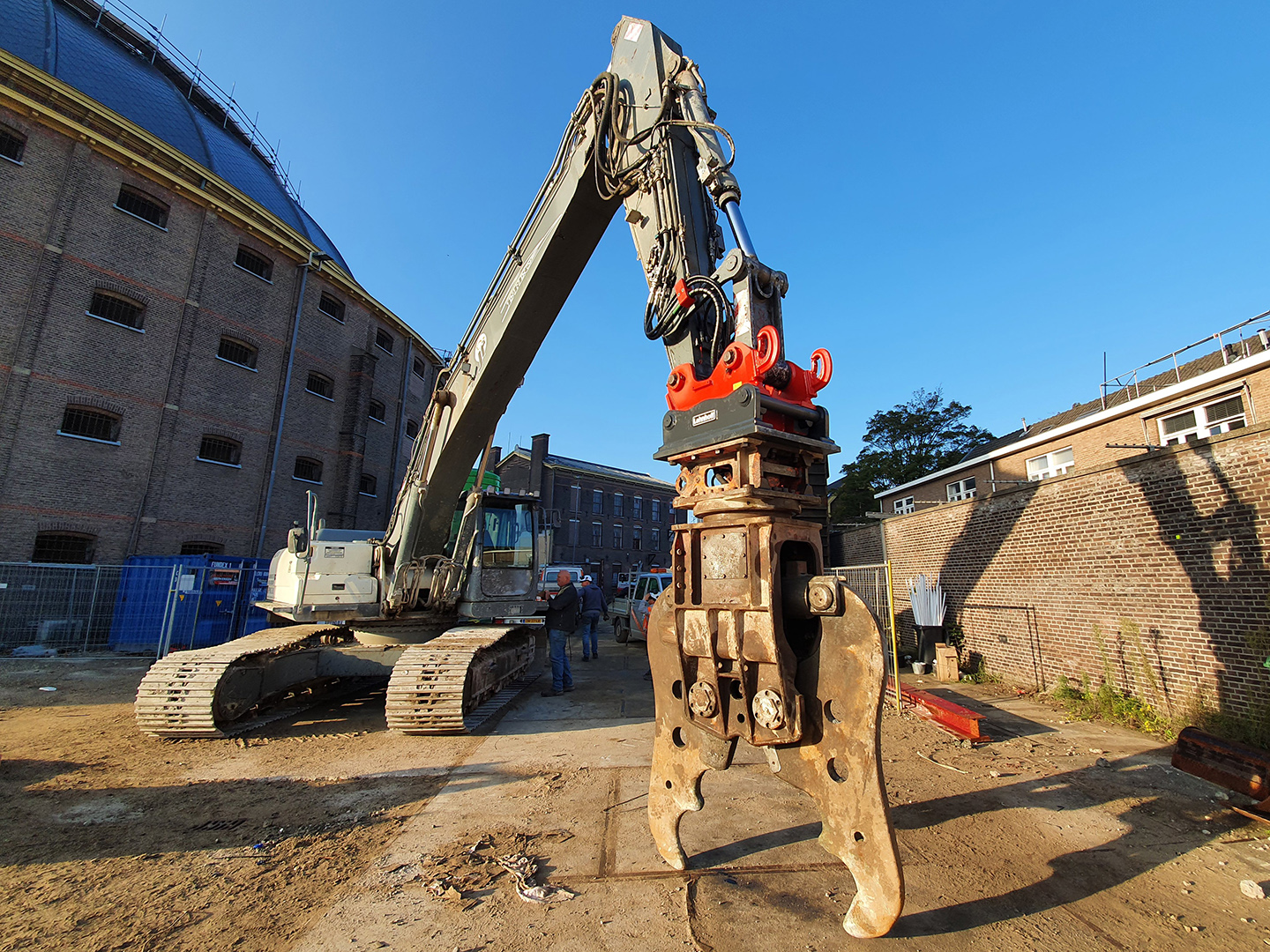 The cell doors have been wide open for a while. New “guests” will not be received here, at the former jail “The Dome” in Dutch Haarlem, until it has been transformed into the central meeting point of the new university campus. To this end, extensive demolition work is currently conducted on site by the specialists of Ripping B.V. from Bergschenhoek (NL).

Contractor and investor is the HBB group. They have the circular, domed building cored to have the former location of 200 cells transfigured into the central structure within an environment of tertiary education – including a cinema in the basement. All other buildings will be demolished to provide the necessary space for new living quarters: 250 flats for students, and another 100 units for social housing, all with the according infrastructure.

The demolition team of Ripping B.V. uses heavy equipment to make short work of the former jail structures. The two excavators Hidromek 300 (32t) and Case CX330HRD (43t) show impressive speed once set to work. Part of that is surely due to the fully hydraulic Lehnhoff Symmetric Quickcoupler SQ 80. Ripping has added those two quickcouplers, which are based on the symmetric s-standard, only in October last year to their equipment, buying them from the dealer DemTech B.V.

Thanks to the SQ, the machines quickly change between shears, clamshell, hammer, pulveriser, backhoe, screening bucket, and sorting bucket by NPK Europe. “We chose the Lehnhoff SQ quickcoupler last year because it is the system with the highest flow rate of oil of all symmetric couplers on the market. And, in addition to that, it doesn’t increase the counter-pressure. Ever since, our machines have saved quite a bit of fuel”, Rippling-CEO Cees Ripping explains.

The special feature of the Lehnhoff quickcouplers is the patented short-lift valve technology with its symmetric design. This ensures a maximum oil flow rate and allows a 180-degree turn of the hydraulic attachments. Consequently – and this is a unique feature even for Lehnhoff – within seconds a crushing bucket can be used as face shovel or high-tip bucket, and a hydraulic tilt bucket can be employed as high-tipping shovel.

Since using the Lehnhoff SQ 80 on the current jail demolition site, downtime is no longer something Ripping B.V. has to worry about. “Before, excavator operators had to wait 15 to 20 minutes after filling a truck before the next would come around. Today, with the SQ 80, there is no need for a pause because he can simply change to a crusher in the meantime”, Ripping explains in view of the improved efficiency.

“The installation is as easy as the changing attachments”, says Arthur Polak, co-owner of the dealer DemTech who specializes in demolition, recycling, and civil engineering. “You only have to hock up the valve block with the hydraulic hoses and then place the panel of the security assitance system Lehmatic Safety Control in the cabin.” Maintenance, he says, is even easier: “Cleaning the valve block or the change of a valve and seal ring can easily be completed by any excavator operator within five minutes.”

His customers often use the Lehnhoff SQ quickcouplers for infrastructure and rail track maintenance projects, Polak says. “Especially on convined construction sites, it just becomes so much easier. If operators can turn around a stiff bucket or use a tilt bucket, tight corners can be handled a lot more efficiently.” The dealer has three variants on offer which Lehnhoff provides for the international market: SQ 60 (excavators from 8 to 18 t), SQ 70 (excavators from 18 to 28 t), and SQ 80 (excavators from 25 to 43 t). In addition to that, Lehnhoff offers adapter frames for bucket conversion, screw adapters for all common hydraulic attachments, and also grip adapters for hanging clamshells.

The DemTech-CEO currently is waiting for more Lehnhoff SQ quickcouplers to be delivered, and Ripping-CEO Cees Ripping also sees an increased demand for them in the near future: “We want to equip our new Kobelco excavator SK270SR with the SQ system by Lehnhoff, too. This allows us to stay within the s-standard and thus, to use all our tools and attachments as flexibly as we want.” Especially since the jail demolition will be completed soon, and other projects are already waiting.

We use cookies to enhance your user experience. Continue with your visit by dismissing this message or find out more